Singapore has been ranked the most expensive city in the world, yet there are few modern cities left in the world where you can get a strong and shiok (awesome) cup of coffee for less than a dollar at hawker centers located in almost every corner, with each cup of coffee customized to your exact desire with milk, sugar, condensed milk, or straight black as desired.

Rose and her sister Arbi (in the photo) have been selling coffee for decades. “Our father used to sell coffee from a small roadside cart on the street until the government resettled us into hawker centers in the 70s. I started helping him when I was 16 years. Last time there were no chairs, customers had to squat on the road. It’s much better now.”

As their mother grew older with the years and became increasingly housebound, the sisters resolved to continue the business together, working from 6am to 8pm to serve workers in the vicinity.

By the way, if you ever feel confused about how to order kopi in the local dialect, no worries. You can refer to this guide called “How to Order Kopi Like a Pro!” created by Burrple, a start-up based at the Launchpad which is right next to the coffee aunties. What’s your favourite kopi? 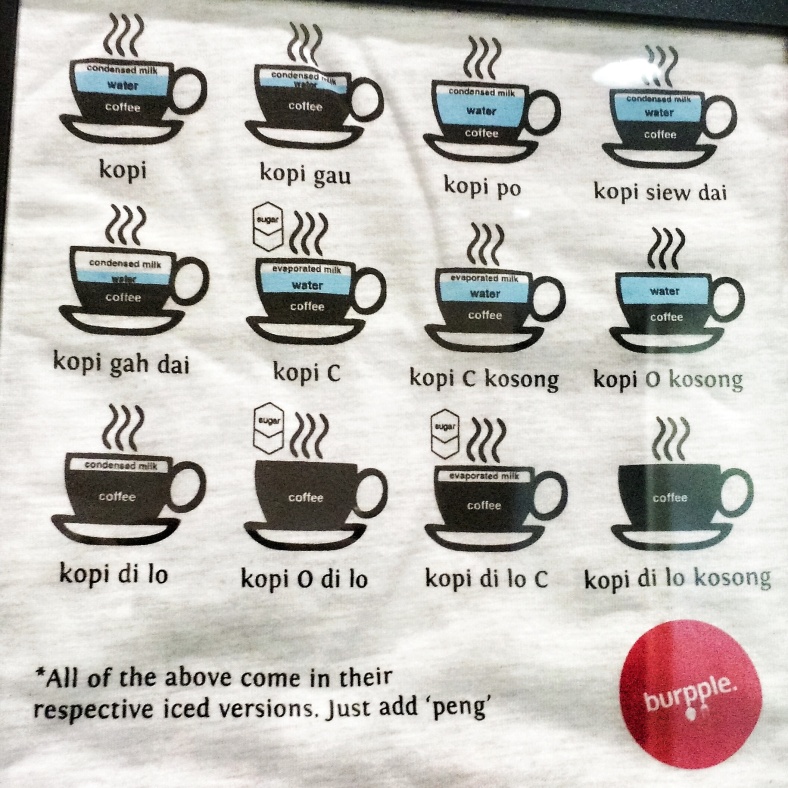 Ruiwen Chua is an entrepreneur based at the Launchpad next to the hawker centre. He produced a mobile app that spits out the exact “coffee code” to express your taste. Now you can order something like “Kopi See Gao Kosong Peng” with a surge of confidence (strong coffee with evaporated milk and ice, no sugar) and even get the app to recite the words for you!

This app is hilarious and, according to Ruiwen, it was a simple experiment while he was figuring out the technology and thought, hey, might as well create something useful!

All in all, whether business owners are working in the “traditional economy” (selling hot coffee) or “new economy” (creating apps about coffee), these are some inspiring examples of how we need to keep koping with change!

By the way, the hawker centre is closed for 6 months for major renovations (from March 2015), but we’ll keep you posted when it’s reopening!

Shopkeeper Stories is a photographic documentary of traders with their wares around the world. You can follow the project on Facebook and Instagram – just look for @ShopkeeperStories!

Why isn't Singapore taking a stronger stand against the military violence in Myanmar?⠀
4 countries objected when the UN Security Council wanted to condemn the army takeover in Myanmar and threaten action against the violence: China, Russia, India and Vietnam. ⠀
China is Myanmar's biggest trading partner! What is Myanmar selling to China?
Thailand is the 2nd biggest trading partner with Myanmar. What are they exchanging?⠀