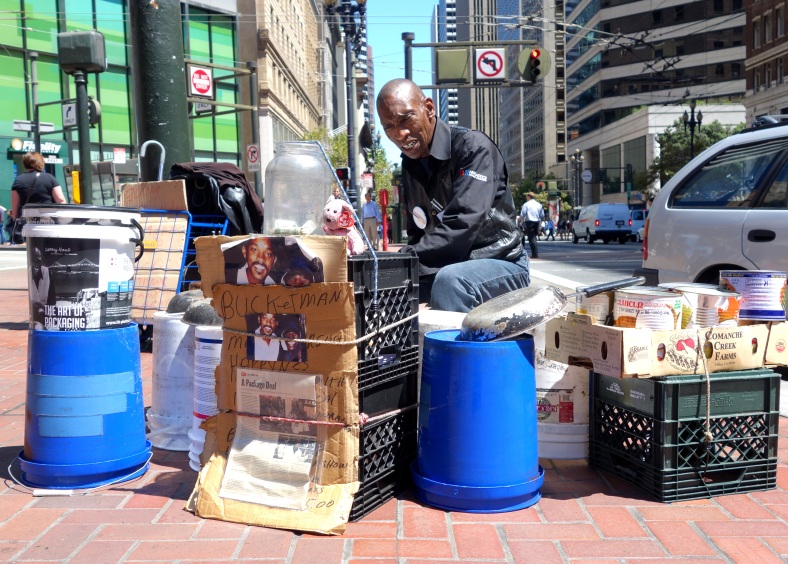 Larry Hunt – the “Bucket Man” – has risen as a cultural icon of San Francisco by playing his plastic drums for more than 20 years on the city streets, yet he gets regularly harassed by the police for being a public nuisance because of the ‘noise’ he creates. The police have confiscated his drums, slapped him with fines, and hauled him to court.

“Bucket Man” has his lovers and haters. In 2006, he was featured in the film “The Pursuit of Happyness” with Will Smith and, in 2014, he was invited to go on an all-expenses paid trip to play his drums at a trade fair in Germany. The European manufacturers were so enamored with his musical talent that they presented him with plastic buckets printed with his own image. “I loved it man, it was a paradise to be in a whole different atmosphere. People treated me like a king over there.”

Back in San Fransisco, he returns to the struggle of making a living. “Stores like Prada, a high-end retailer, expect a high-end ambiance. Someone banging on plastic bins outside takes away from that,” says Claude Imbualt, a manager at the Union Square Business Improvement District (BID).

Larry describes how it feels to play for passer-bys: “You can see all the faces, they can be upset, mad, or disappointed, but with a certain beat, and smile, and song of mine, it will just change the whole… aspect of what they’re doing, you know, and that’s what it’s all about. Music makes people happy. Music changes the whole universe.”

About his work as a musician: “I look at all the people I was on the street with, doing the same.. they have not changed since I’ve been off the street… all my friends I used to party with, drink with, smoke with, they ain’t changed, they ain’t made a move. And I have. And that shows progress. I’m going to do this till I die. Sometimes it makes me want to cry, coz, wow, I’m really doing something good!”